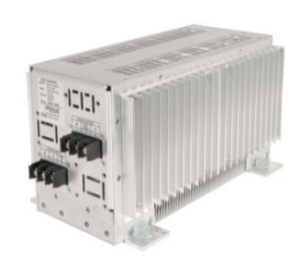 The BAP 1KR‐U7712 railway quality DC/DC converter generates up to 1kW output power with convection cooling (no fans). Several units can be paralleled for higher output power. The unit is housed in a compact, ruggedly constructed 7” x 7” x 12” chassis. It has large design headroom and is rated for operation over a wide temperature range without de‐rating. The design is built with two BAP 65F internal modules, which have a well‐established track record in numerous other heavy duty applications. Each internal module generates a minimum of 500W. This modular construction provides inherent redundancy; the failure of one internal module would result in a 50% drop in output power while the unit remains functional at 500W. This design can also be used as a 500W redundant power supply. Two independent fully regulated outputs of 500W each are also possible.  The unit has input and output filtering in compliance with EN50121‐3‐2 conducted and radiated EMI standards. The internal models are fully ruggedized and conformal coated for immunity to shock, vibration and moisture. Options include a Form C module fail alarm and remote shutdown. Full electronic protection eliminates failure due to abnormal operating conditions, including application errors. Low component count and the use of components with established reliability result in a high MTBF. The converter meets the requirements of EN50155 for electronic equipment used on railway rolling stock. It is manufactured at our plant under strict quality control.